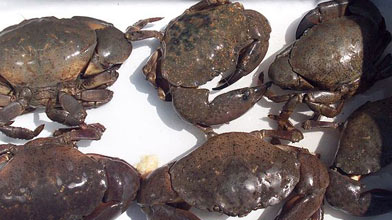 Stone crabs differ from blue crabs in that only the over-sized claws are harvested. This highly nutritive meat is considered a rare delicacy and is usually boiled and served in the shell with a sauce. The meat resembles lobster in appearance and flavor.

Stone crabs inhabit bays and estuaries where they hide among rocks and shell fragments. When full grown they move into shoals just below the low tide mark and dig oblique burrows 12 inches to 20 inches deep. Stone crabs are found along the Atlantic and Gulf coasts, but are commercially harvested almost entirely in Florida.

Fishery regulations specify a harvest season of October 16 to May 14. Stone crabs are captured commercially with traps, which are re-baited every other day. Florida law forbids the taking of whole stone crabs; only the claws are removed without harm to the animal. Fishermen are allowed to take claws at least 2 3/4 inches long and are required to return stone crabs safely to the water. The stone crab can regenerate its claws three to four times.

Freezing or icing raw stone crab claws causes the meat to stick to the inside of the shell. To prevent this problem they are cooked immediately after harvest. Cooked, frozen stone crab claws store for long periods without deterioration. When purchasing stone crab claws an indication of freshness is the presence of mild, ocean-like odors.

Store cooked stone crab claws in the refrigerator at 32-38 degrees F., or pack in ice no longer than two to three days. Freeze claws that are completely intact (occasionally claws are cracked during handling) at 0 degrees F. or lower. The shelf life of the claw is about six months. Frozen claws will thaw in the refrigerator in about 12-18 hours. Quality is lost when claws are thawed under cold running water or at room temperature.