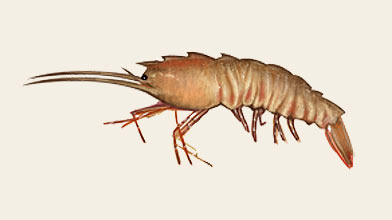 Shrimp is the most popular and valuable seafood in the United States. This delicate and delicious crustacean is desired the world over, with hundreds of species harvested from fresh water and saltwater. There are four species of shrimp of commercial value in the Gulf of Mexico and South Atlantic waters. It takes an expert to distinguish one from another. To make a distinction, they are roughly categorized according to color. The four major kinds are: brown shrimp (Penaeus aztecus), pink shrimp (Penaeus duorarum), white shrimp (Penaeus setiferus) and royal red shrimp (Pleoticus robustus or Hymenopenaeus robustus).

Shrimp are decapod crustaceans characterized by five pairs of legs with small pincers on the end. The first three pairs are used for walking. They have large, well-developed eyes, large swimmerets, and long antennae. The color varies depending on the species. Pink shrimp found along the Atlantic coast are usually brown; those found along the northern Gulf coast are often lemon-yellow; and those found in Florida's Tortugas are pink. White shrimp are grayish-white with a green, red or blue tinge on the tail and legs. Royal red shrimp are usually deep red, but are sometimes grayish pink.

Most shrimp spawn offshore in deep water from early spring through early fall. Young shrimp are carried by currents into coastal estuaries to mature. In Florida, shrimp are harvested with trawls, which are cone-shaped nets towed along the bottom in shallower waters near shore. Turtle excluder devices (TEDS) and by-catch reduction devices (BRDS) are used, as required by law, to minimize the capture of non-target marine turtles and fish.

Shrimp are an excellent source of high-quality protein, vitamins, minerals, and they are low in fat. Shrimp are delicious and easily prepared, whether boiled, broiled, baked, grilled, or fried. Store fresh shrimp in the refrigerator at 32-38 degrees F. and use in one or two days. If frozen, store at 0 degrees F. and use within six months. Thaw shrimp in the refrigerator or under cold running water.