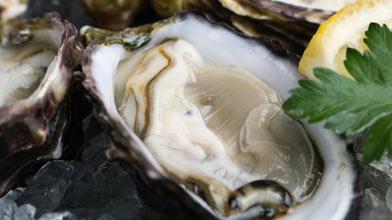 The cultivation of oysters began more than 2,000 years ago when Romans collected oyster seed stock near the mouth of the Adriatic Sea and transported it to another part of Italy for growout. The Romans had such a passion for oysters that they imported them from all over the Mediterranean and European coasts.

Oysters flourish in estuaries where nutrient-rich fresh water meets the salt water. Oysters feed mainly on single-celled plants. When feeding, the oyster can pump and filter 25 gallons of water in 24 hours. Florida's estuaries provide suitable conditions and a plentiful food supply for the Gulf coast oysters to grow rapidly. They can reach marketable size in less than two years, whereas it may take oysters up to six years to reach marketable size in colder northern waters. When traveling along the Gulf coast, you may see oysters being harvested commercially from small boats by fishermen using large, long-handled tongs to scoop clumps of oysters from the bottom.

The mineral content of oysters is high and includes copper, iodine, and iron. Oysters are one of nature's richest sources of iron, eight ounces provides 13.2 milligrams or 73% of the maximum adult daily iron requirement (18 milligrams).

Oysters are delicious eaten fried, baked, steamed, broiled, or microwaved and can be served as appetizers, main dishes, side dishes, or salads. Oyster stew attests to the delicious flavor of the cooked oyster in its own broth.

When purchasing live oysters, choose oysters that close tightly when handled. If not, discard. Live oysters are sold by the dozen, 1/2 bushel, peck, or bushel. They will remain alive from seven to 10 days when stored in a refrigerator and covered with a clean damp cloth or paper towels at 35-45 degrees F. Do not store live oysters in an airtight container.

Shucked oysters are graded and sold according to size, the largest marketed are "selects" and the average are "standards." Store fresh, shucked oysters on ice or in the coldest part of the refrigerator and use within five days of purchase. If oysters are purchased frozen in an airtight container, use them within two months. Thaw them in the container under cold running water or in the refrigerator. Never refreeze. Home freezing is not recommended unless oysters were purchased commercially packed in an airtight container, then they should be used within two months.

There is risk associated with consuming raw oysters. If you have chronic illness of the liver, stomach, or blood, or have immune disorders, you are at greater risk of serious illness from eating raw oysters and should eat oysters fully cooked. If unsure of your risk, consult a physician.