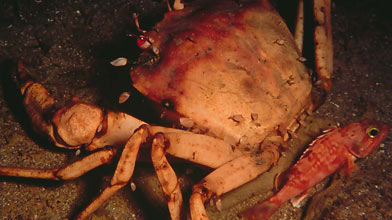 The golden crab is a large, non-swimming crab from the deep waters of the Gulf of Mexico and South Atlantic Ocean. Adult males typically weigh between three and five pounds, while the female is considerably smaller and with limited commercial value. Its golden-cream shell color sets this crab apart from its close relatives, the deep-sea red crabs, snow and king.

A "condo" trap is one of the most effective means of harvesting the golden crab. This is a large (2-1/2' x 4' x 6') box-type wire trap with a bait-holding cylinder and two tapered openings located at opposite ends. Traps are set by using a long line at depths of 540-2,160 feet (East coast) and at 1,140-2,880 feet (north of the Florida Keys). The large traps are retrieved by grappling hooks and mechanical pulleys. Fishing for golden crabs is dangerous and risky work.

The white meat and delicate flavor of this exotic crab lends itself to a wide variety of seafood tastes. The preferred way to prepare golden crab is steamed and served with melted butter. It can also be used in recipes which call for blue crab or stone crab, and in many lobster and shrimp recipes. Generally, golden crab may be purchased in three forms: live, cooked halves or clusters, and picked meat. The meat is found in the claws, legs, and body after the upper shell and gills have been removed. To pick golden crab clusters, use a twisting motion to pull legs and claws from the body and remove the meat, which pulls out of the body. Pull meat out of the legs by carefully breaking them at the joints. Remove claw meat by pulling out the movable pincer. Any meat that remains in the legs or claws can be easily exposed with kitchen shears or nut-cracking utensils. Breaking the body cartilage apart will expose the remaining crab meat.

This species comes from extremely deep water and should remain chilled (below 45 degrees F.) until cooked. The shell of the golden crab does not turn red during cooking like other crabs, but remains golden buff in color. To cook live golden crab, bring a large pot of water to a boil and season to preference. Boil the crab completely submerged for 16 minutes, drain and rinse in cold water.