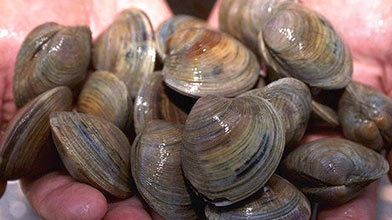 Clams are perhaps the most versatile seafood species in the world, ranging from the robust taste of a freshly shucked clam to a satisfying bowl of clam chowder. There are many types of clams, each with its own size, taste, and appearance. In the Gulf and South Atlantic region, the hard clam, also known as the quahog, is king.

The hard clam is a brown, nearly oval-shaped bivalve mollusk with, as the name suggests, thick, hard shells protecting the delicious meat. It can grow to a width of 4 1/2 inches and is marked by rings or ridges that indicate its growth and age, which can be 30 years or longer.

The most prominent features of the hard clam's body are the foot and the necks, or siphons. The foot allows the clam to bury itself in soft sand. The tube-like necks pump sea water, up to three gallons an hour, in and out of the clam. During this process, the hard clam filters out and feeds on plankton and other microscopic organisms.

Hard clams are farm-raised and commercially harvested all year. Farmers lease coastal water bottoms and "plant" seed clams under nets or in mesh bags. Wild hard clam fishermen and some farmers use a "jerk rake" to harvest clams. A rake- like head on the end of an elongated steel pole is pulled or jerked across the bottom manually to pull the clams up and out of the sediments. Hard clams are graded and marketed by size in the shell or they are shucked and the meats canned.